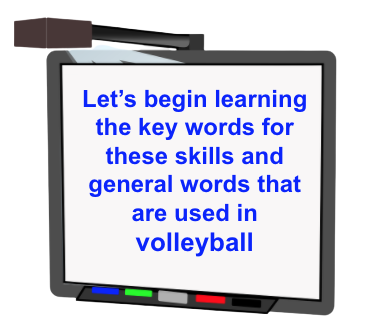 Attack line, 3 meter line, 10′ line:The line that separates front court from backcourt with modification of distance based on level of play and/or organizations that current rules (i.e. NFHS, NCAA, USAV)

Attack, Spike, Hit:All 3 terms are used for either the down ball without a jump or a ball that allows a player to make an overhand motion and approach and jump.

Attacking: The athlete must first be able to demonstrate the attacking motion (down ball) and then progress to jump and hit. When adding arms, they both start at the side of athletes’ body. Arms taken straight back and then thrust forward (backswing, upswing and arm swing). The count of 1,2,3,4 & 5 is used for the entire attacking motion.

Key Words: Arm swing Quarter turn, Puppet / elbow up, pointe to the ball with non hitting arm, lead with elbow, extend arm as you reach and follow through.

Approach:  The movement used in attacking and jump serving

Center line: The line directly under the net and separates the two sides of the court equally.

Down ball: When a players stands on the ground and uses the quarter turn, puppet then uses the attack motion for hitting. 1, 2, 3, 4 & 5.

Endline: The line at the end the court or sometimes for older age group called serving line. A ball that has not been touched and lands past this line is considered out of bounds.

Linear Floater (jump): Approach is similar to attack without arm swing. First utilize the 2 step approach, last two steps are critical and once you have mastered these steps add your three step approach or possibly a four step approach. Lift the ball on last two steps and contact through the middle of the ball and extend hand flat and end with hand facing the end of court (wall if in a facility).

Linear Topsin (jump): Approach and arm swing is similar to the attack.  First utilize the 2-step approach, last two steps are critical and once you have mastered these steps add your three step approach or possibly a four step approach. Toss, approach, reach and follow through to extend your wrist over the top of the ball and initial contact is slightly below the middle of the ball.

Pass, Forearm Pass and Bump: Contact on forearms or our platform utilizing wrist/thumbs/hands together.

Passing: Is the skill that is mostly used during returning the serve. Upon contact, the athlete maintains a stationary straight arm position so that the ball rebounds offs the lower part of the forearms and is directed towards the target. Accurate and consistent passing can results in an aggressive multiple attack.

Key Words for Passing: Wrist together, thumbs parallel, arms out in front and away from chest, hold for a picture (freezer), use legs, not swinging arms.

Puppet: Used to describe the position that you are in prior to attacking, static or linear serving.

Quarter-turn: Position that your feet should be in prior to hitting a down ball, take-off position when attacking and jump serving and executing a static serve. Toes are facing an angle toward the setter.

Setting: Overhead passing, hand setting is the second step in the pass-set-attack sequence. An excellent set can results in a kill.

Keywords for Setting: Hands up early, forefingers and thumbs around panels (hands around the ball), ball shaped hands, thumbs to cheekbones, elbows slightly down and forward (not out), follow through and straighten arms, hold finish flat like supergirl or superman, right foot in front and using legs.

Set: Can consist of any amount of points determined by league, age level or level of play

Sideline: The line on each side of the court which designates the inbounds lines.

Static Topsin (down): This serve is on the ground and you can add a step for power. This serve begins with facing the sideline and ball on forehead, reach out and ball above your head and contact ball with your wrist firm and push through the ball.

Static Japanese Floater (down): This serve is on the ground and you can add a step for power. This serve begins with facing the sideline and ball on forehead, reach out and ball above your head and contact ball with your wrist back through the ball.

Thumbs toward cheekbones: Position of hands for setting.

Point: When a team scores

Antenna, PIN:
placed on each sideline on the net

Footballs:
small footballs are used to work on arm swing mechanics for attacking

Jump Ropes:
many combinations can be used with jump rope routines as a 3-5 minute warm-up before training and footwork exercises.

Youth Softlight ball (small):
used for training 10 and under

Youth Softlight ball (oversized):
used for training 8 and under, ideal for ages 4-8

Volleyball lite:
used for training 112 and under, most ideal for ages 11-12 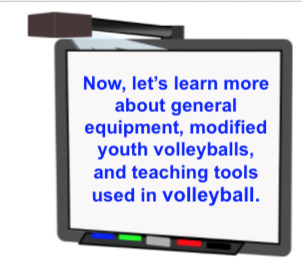